“Every languages is unique, and losing a language is like losing a part of humanity’s heritage.”

Tania Granadillo, professor with Western University's Department of Anthropology said that around the world, languages are endangered, and “we will lose half of the 6,000 to 7,000 languages in the world by the end of the 21st century if nothing is done.”

This summer, Granadillo and students in the summer Anthropology course Language Revitalization in Practice partnered with the Oneida Language and Cultural Centre to support the Centre’s work in encouraging use of the Oneida language.

Working with community members from the Oneida Nation of the Thames, students are making Oneida-language material more accessible for younger learners and for future generations, mainly through digitizing existing materials.

While the situation is different for each endangered language, many languages become threatened due to the establishment of a dominant language, used by institutions like government and education.

“People see it as limiting the possibility of success if they don’t have a grasp on their dominant language,” said Granadillo. “This goes hand in hand with the mistaken idea that it is difficult for kids to speak or learn more than one language, so their parents are more likely to choose the dominant language. In Canada, this was exacerbated by the residential school system and the policies that hindered people from using their language, or even punished them.”

Granadillo points out that it is actually much easier to learn two languages from birth than it is to learn a second language later in life, especially if the languages are as different as English (an Indo-European language) and Oneida and other Aboriginal languages.

Olive Elm is an Oneida language consultant, and an Elder of the Oneida nation. She learned Oneida as her first language and did not even hear English spoken until she first went to school at age seven. While at school she was punished for speaking Oneida. This changed her views of her language.

“I felt that if I’m having this much trouble speaking, I won’t teach my children – when I have them – how to speak,” said Elm. “I didn’t think it was that important until I heard we were losing it.”

Elm now works as a consultant to help develop Oneida language materials, works with government groups to translate documents into Oneida, and worked with the students in the course to help translate materials.

When Elm began working as a consultant, there were 263 fluent Oneida speakers in the community; now 28 years later there are 60. “I realized that as a fluent speaker, if I didn’t do anything to help, we would lose it.”

While loss of languages has always been recognized within the communities, linguists started to call attention to the situation in the 1990s, said Granadillo. “The range of world languages helps us understand what the human brain is capable of in terms of language. Languages carry cultural and environmental knowledge.”

The languages are also important to the people that speak them. There is a correlation between knowledge of your indigenous language and health and well-being in the community. Knowing your language “provides a sense of identity and community grounding in culture,” said Granadillo. “It helps you function better in society.”

Many Canadians may have a personal connection to another heritage language, perhaps spoken by parents or grandparents, but not taught to the child, said Granadillo. “A big difference with Aboriginal languages is that there are no other groups of speakers.”

For the students in the course, working with the Oneida speakers has helped provide a personal link to a global phenomenon. 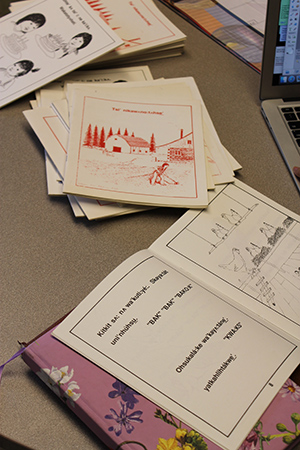 Ashna Ali is in her final year of the Anthropology program. Through her course, she worked to digitize eight Oneida-language children’s books originally written in the 1970s. She recorded Elders reading the books, and is converting the books to an e-book format with interactive elements.

Ali felt the course was an “eye-opening experience” and helped her develop a better understanding of Indigenous communities. It also gave her a better appreciation for applying what she learned in class; “For service work, we often take on what we think is best; now we are able to work directly with the community and deliver what they want.”

Building on the partnership with the Oneida Nation, Granadillo and the students are preparing how-to manuals for anyone who would like to undertake similar tasks for other language resources.

Granadillo hopes to continue the work and offer the course again in summer of 2018.