Why do ideas developed by think tanks gain more traction than those that come from universities? 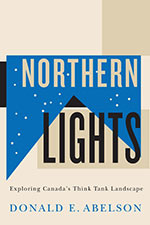 That is one of the questions that Don Abelson, Professor in the Department of Political Science, considers in his new book, Northern Lights: Exploring Canada’s Think Tank Landscape.

Abelson’s research has always focused on think tanks, but as with most of the literature on the subject, he focused on think tanks in the context of the United States. He was interested in looking into what is happening in Canada. Northern Lights is the first book that systematically answers fundamental questions about Canadian think tanks, including how they are funded and how much influence they have.

While think tanks have been active in Canada since the turn of the 20th century, Abelson said that they are beginning to occupy a more visible part of the landscape. This is partly due to the focus some think tanks are placing on marketing their ideas, which he says coincides with a move away from developing ideas.

As non-profit tax-exempt organizations, think tanks are limited in terms of the amount of their budget they can spend on partisan activities. In recent years, there has been more scrutiny on how think tanks spend their money.

Abelson focused on measuring the visibility and influence of the think tanks, and considered the best way influence can be achieved.

In Northern Lights, he shows that while some groups, such as the Fraser Institute, the Conference Board of Canada and the C.D. Howe Institute receive a great amount of media attention, they do not necessarily have the largest impact on policy development. Lesser known think tanks, such as the Caledon Institute, may have a fair amount of access and greater policy impact.

The focus on advocacy has contributed to the marginalization of Social Science research coming from universities, as the incentive structure is different for universities and think tanks, Abelson said. 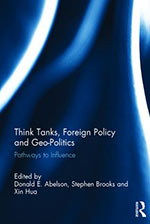 Abelson intended the book to be a primer, and accessible for the public. “Ideas have consequences,” said Abelson. “It’s important for the public to understand the kind of organizations developing ideas that government sometimes enact.”

“We often think about interest groups but how often do we think about think tanks,” he said.

Abelson also co-edited a book focused on an international comparison of think thanks. Think Tanks, Foreign Policy and Geo-politics is an edited collection bringing together the best think tank focused researchers from around the world to write about the think tank experience in their own country. The collections include research about think tanks in Canada, China, the European Union, Spain, Germany and the United States.