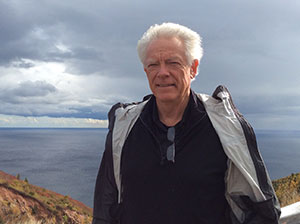 During his 40 year career at Western Craig Boydell has been a leader in the classroom and on the basketball court. Boydell’s contributions were recognized recently as he was named to the Alumni Sports Hall of Fame in the “Builder” category for his achievements as the Men’s Varsity Basketball coach and his contributions to the Coaching Fraternity both locally and nationally where he served as the President of the National Coaches Association.

While still in the Faculty of Social Science he served as lead assistant to Head Coach Doug Hayes for five years. In the first of those years in 1986 the team went on to its first National Championship appearance in two decades and according to Boydell “I was hooked.” He transferred over to the faculty of Kinesiology in 1988 after an Administrative Study leave, established a Sport and Social Policy Lab along with a graduate course in Policy Analysis before moving into the Head Coaching position two years later. During his 14 year tenure as head coach Boydell’s five conference, four provincial championships and Western’s only National Championship. He was also voted coach of the year on numerous occasions by his coaching colleagues. He holds many Western Coaching records and his 327-123 won-loss record established him among the elite coaches in Canada.

While being recognized on this occasion for achievements in sport Boydell feels he was extremely fortunate to have been a part of two other major team building operations in his first twenty years at Western in the Faculty of Social Science. He was recruited to Western in 1969 primarily as a Criminologist with a group of other young faculty members with the mission of helping to build a department of Sociology from the ground up. In the early stages he developed numerous graduate and undergraduate courses in Crime Delinquency, Deviance Theory, Social Problems and Justice Administration as well as serving terms as Chair of the Graduate Program. In addition Boydell along with Professors Grindstaff and Whitehead helped fill a very major void at the time by published a series of five Edited Readings that were among the first texts for Canadian Sociology Students with totally Canadian content.

“It was a wild and exciting time. We were a young fast growing department with no shortage of energy and ideas as we attempted to build a curriculum that covered all the major arears of Sociology. We must have done something right because we were able to attract some outstanding men and women in all areas of Sociology who carried the program to new heights from those early beginnings.”

Boydell had found a niche in program and course development as well as a commitment to creating experiential learning opportunities for students outside of the traditional classroom both of which he connects to coaching models of education.

In 1977 he was offered what he considered an incredible opportunity and what he later considered perhaps his major team building and coaching challenge when Dean Kymlicka asked him to head up a new unit (Office of Special Programs) in the Faculty. “Kym was a Dean’s Dean” says Boydell. “He didn’t just administer things. He had the imagination, energy, persistence and nerve to make things happen for his faculty.”

Boydell became the founding director of the Administration and Commercial Studies Program (ACS), which has now transitioned into the DAN Bachelor’s Degree in Management and Organizational Studies (BMOS) which will soon celebrate its 40th year since conception.

“The challenge was to create massive inter-disciplinary program that relied on the cooperation of some 18 different departments in four separate faculties including the Affiliated Colleges. It was a total innovation. There was no blue print to copy and there was far from unanimous support or agreement on the shape of such a program to say nothing about whether it should even exist. However, with Kym’s commitment to the concept, outstanding support from Associate Dean Susan Pepper and the cooperation and input from the Chairs and professors of so many diverse units the three separate majors within the initial ACS program where assembled, approved and up and running. Within two years of its conception it was one of the highest demand entry programs in the country. I still remember how lucky I was to be involved in such a challenging and rewarding team building project and how much I learned.”

“The life concepts that can be transmitted through coaching a sport, as well as other intense non-classroom experiential learning settings at universities have lasting effects well beyond graduation,” said Boydell. “When all of the x’s and o’s and wins and losses have long been forgotten the essential messages of teamwork, commitment to goals, sacrifice, work, mutual support, dealing with setbacks, taking responsibility for your actions, and the like have an enduring impact that spans majors, careers, professions and life stages.”