Segregation and the Perpetuation of Poverty 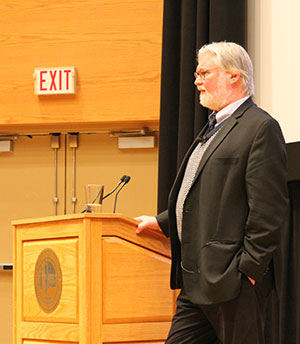 If campaign promises and early moves hold true, the incoming Trump Administration will be a clear step backward on civil rights and desegregation in the United States, according to a Princeton University professor, who spoke at Western University on December 1.

“I don’t see any hope for progress in next two years – and we will see back-sliding on a number of fronts,” said Douglas Massey, a Princeton Sociology professor, who will deliver the inaugural Balakrishnan Distinguished Lecture in Population Dynamics and Inequality entitled, Segregation and the Perpetuation of Poverty.

Long linked to issues like poverty and other quality of life issues for mainly minorities, segregation is a major feature of human societies. Massey spoke to the subject by describing ways it promotes disadvantages across time, lifecycles and generations.

Segregation can have long-term economic and health impacts as well.

“Segregation is a main factor in concentrated poverty,” he continued. “When this happens, you create harsh, disordered and often violent environments. Exposure to this over the long term undermines health and well-being in a number of different way.” This included increased exposure to stress hormones, differences in gene expression which are passed from one generation to the next, and decreased telomere length, which in turn increases levels of diseases. This is Massey’s current area of research.

While black/white segregation has declined on average in the United States, Massey said those figures are misleading, as some major metropolitan area have not seen a decline at all. Cities like Detroit, Milwaukee, St. Louis and Chicago are the source of many of America’s most pressing urban problems. In addition, cities such as Los Angeles and New York are starting to show levels of segregation amongst Latino populations comparable to historic levels as seen by black populations.

White Americans, said Massey, are by far the most racially isolated group. The best predictor of a Trump vote was the proportion of whites living in segregated white neighbourhoods.

The Trump campaign was belligerently racists, especially toward Mexicans, and as Republicans control both houses of Congress, “racially conservative people will be in positions of power,” Massey stressed. By way of example, he pointed to the appointment of Sen. Jeff Sessions as Attorney General, whom Massey calls “a well-known racists.” In 1986, Sessions was rejected for a federal judgeship because of alleged racist remarks.

While Massey’s research focuses primarily on the United States, his lecture touched on segregation around the world, including in Canada. With levels of segregation lower than its neighbours to the south, Canada still has issues of segregation and concentrated poverty.

“The speaker series will help raise awareness of the department and build the profile again,” said Balakrishnan. “I feel I contributed over the year to build Sociology and the population studies and I would like to see that flourish.”