"When people learn their language, they have a better sense of identity" 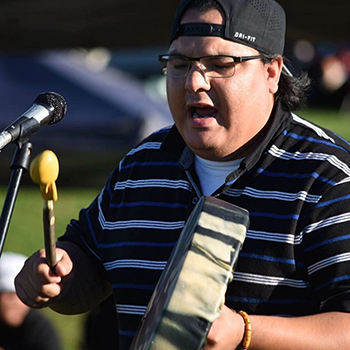 For Frazer Sundown, learning the Oneida language and performing traditional powwow music has helped define his identity – and his plans for the future.

A student in the First Nations Studies program at Western, Sundown is a member of the Turtle Clan of the Oneida Nation of the Thames. Learning the Oneida language has helped him develop a better sense of self and has inspired him to complete his teaching degree and teach the language – one that has a mere few dozen surviving speakers today – to the next generation.

“When people learn their language, they have a better sense of identity, and become more confident in the world,” said Sundown. “They experience a closer connection to the world."

While he learned some of the language growing up, taking language courses has given him a deeper understanding of its implications and its cultural significance. It is a language that thoughtfully reflects on action, he explained.

“The Oneida language is a verb-based language, so when we say something, it has much more meaning,” Sundown said. The language and words used change dependent on how the subject interacts with the environment, making the language more nuanced.

Sundown, who is also an artist, creates traditional powwow music and visual arts, both of which have taken him on performances around the world, helping him define his cultural identity along the way. He has collaborated with other artists to expand and redefine the understanding of Indigenous music. Among the collaborations, Sundown worked with DJ Shub, formerly of a Tribe Called Red and cellist Cris Derksen, who mixes traditional powwow music with orchestral instruments. He was featured on Bryden Gwiss Kiwenzie’s album Round Dance & Beats, which was nominated for a Juno Award for Indigenous Music Album of the Year. He partnered with his father on an album and has released a solo album, Love is a War Dance.

Powwow step and other expansions of the music are a doorway for people to develop a better understanding of their own Indigenous culture, Sundown noted.

“I’m happy the new form of music has come about in the mainstream,” he said. “There are a lot of people who don’t understand the traditional ways because they may not have access to music. As an Indigenous person in the city, they can get drawn away from their roots. Traditional music mixed with mainstream opens doors to find out more about tradition.”

“History has made us put up a shield around our ways and teaching,” Sundown continued. “Our culture has been stripped from and us, and we work to protect that. With the DJs, the shield has been taken down from our identity.”

Sundown is careful to respect the purpose of a song. “There is a line in the music I create – some (music is) ceremonial, and others for social gathering. The ceremonial music doesn’t get put out there for remixing,” said Sundown. “I want to be authentic by not putting out too much, and to keep what is sacred, sacred.”

At the end of the day, however, the music he creates is about bringing people together.

“We live in times where we don’t gather the way we used to. Songs are meant for everybody, people of all traditions and backgrounds,” he said, adding music could help others discover and define their identity, too.

“If that music is heard, it could spark an interest into looking into who they are, and could open their minds to find someone who carries that knowledge,” said Sundown, “We’re in a new era, where there is more interaction with all people. Creativity is good; It creates a sense of belonging.”

On March 6th, in celebration of Canada 150, the Don Wright Faculty of Music will host two workshop presentations on the transition from powwow music to powwow step with Frazer Sundown and dancers and DJ Classic Roots.