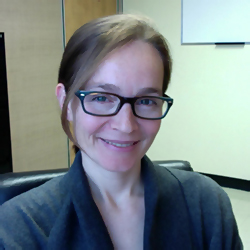 “We have no idea what good social skills are,” said Erin Heerey, Associate Professor in the Department of Psychology. “There are many ways for interactions to go right, or go wrong.”

Heerey studies face-to-face behaviour, particularly how people use social cues, how they send and receive them and what value they place on them. Face-to-face interactions are among the more complicated things people can do, but despite this, humans are able to perform them well, responding to changing situations with remarkable speed, Heerey said.

On April 6, Heerey will be speaking at the London Public Library as part of The Science of Being Human 2017 Lecture Series, presented by the Department of Psychology.

Heerey’s presentation will look at six different findings about face-to-face interactions. Topics include the role of teasing in developing social hierarchies, how social anxiety changes behaviour and how social rejection changes social interaction. Heerey said some of the findings presented may be surprising for her audience.

Heerey points to the role smiles play in social interactions. “People reciprocate smiles, and will do this with appropriate smile type,” said Heerey. “If given a genuine smile, will respond with genuine smile; a polite smile is met with a polite smile.” If someone misses the initial social cue, or does not respond in an ‘appropriate’ way, the social interaction could fall apart. This could be true, Heerey said, of people with autism, or people in treatment for schizophrenia.

Interactions are made more complicated by biases we all carry, Heerey said, which are shaped by a life-time of interaction history. “We all have biases in favour of our in-group,” said Heerey. “We trust people who look like us.” There is also a long history of research showing biases in favour of ‘beautiful people’, Heerey said, and these biases are relatively difficult to overcome.

Heerey is careful not to provide guidance for improving different aspects of social interaction. In general, Heerey said, the way people approach social interactions plays an important role in how successful they are.

“If I could give someone one piece of advice to improve their social interaction, it would be to treat people the way you want to be treated. Be kind. Be respectful. We are good at sussing out information from our partners,” said Heerey. “If you feel they are genuinely positive, it is difficult to be negative. Approach it as a positive interaction.”

Heerey’s future research will be using data collected from speed dating to measure how individuals change their behaviour over many interactions. This work will begin to map the domain of social interaction space and look at how subtle behavioural changes communicate different social messages.

Erin Heerey will present “The Six Secrets of Social behaviour” on Thursday, April 6, 7-8:30 pm, at the London Central Library, Stevenson & Hunt Meeting Room A. The theme of the Science of Being Human 2017 Lecture Series is "Can We All Get Along?" The lecture series will also feature talks by Ryan Stevenson, "Do You Hear What I Hear?" on April 13, and Lynne Zarbatany, "Why Do Bullies Bully?" on April 20.