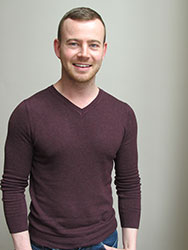 Sean Waite is joining the Department of Sociology at Western University as Assistant Professor, coming from Memorial University.

The position will be a homecoming of sorts for Waite, who was raised in London and completed his undergraduate degree at Kings. Waite completed his PhD at McGill University in 2016.

Waite is excited to be returning to Western. “I chose to do a doctorate at McGill with hopes of being able to return to Western to teach,” said Waite.

Waite’s current project, LGBTQ at Work, is a mixed-method study of the labour market experiences of Canada’s LGBTQ community. Working with Nicole Denier, a Postdoctoral Fellow in Sociology at Colby College, this project aims to bring sexual orientation and gender expression into the labour market literature. This includes quantitative data analysis and interviews with LGBTQ people across Canada regarding employment preferences and experiences.

The project also includes an experimental audit study to determine whether or not employers have a preference for hiring heterosexual job applicants over gay and lesbian signaled job applicants. In this study, sexual orientation is signaled on resumes by involvement in a gay or lesbian university organization. Pairs of resumes (including the gay/lesbian signaled applicants) are sent to employers and the rate of interview offers are compared. Previous studies have found that employers have a preference for hiring heterosexuals but it is unclear whether this preference varies between white-collar and blue-collar jobs or across Canada.

“There is reason to suspect that employment discrimination against the LGBTQ community may vary by place,” Waite said. “For example, preliminary findings from interviews with the LGBTQ community reveal considerable apprehension for residing in Alberta.” The geographic consideration of the resume audit study will help determine whether the preference for heterosexual job seekers is stronger in some cities than others. “Similarly, it is unknown whether this preference is greater in blue-collar than white-collar jobs. Our study will address this,” said Waite.

The resume audit study will be followed up by interviews with employers to determine views on hiring practices as they relate to members of the LGBTQ community.

The biggest limitation when studying the labour market experiences of the LGBTQ community continues to be the dearth of high quality data, said Waite. This is particularly the case for the bisexual and transgender communities. “By using a variety of research methodologies, we are able to gain a better understanding of the employment experiences of LGBTQ individuals who have, until recently, not been included in the labour market literature.”

Waite will join the Department of Sociology on July 1, 2017.