Echo, a female superhero in Marvel’s Daredevil and Avengers comics, is one of the very few deaf comic characters. Because she is deaf, Echo pays attention to visual details and movements, allowing her to learn new abilities by watching others.

But what actually causes these ‘super senses’ following profound hearing loss in non-superheroes?

“We know when you lose one sense, the remaining senses become heightened to help you navigate the world better,” explained Blake Butler, PhD, an adjunct research professor with the Department of Psychology. 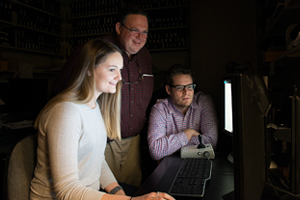 Many people believe that, like Echo, this phenomenon occurs in the deaf by seeing and learning new behaviours. However, Butler and Stephen Lomber, PhD, Professor with the Department of Physiology and Pharmacology, and Psychology, and Canada Research Chair in Brain Plasticity and Development, are looking at the anatomy underlying these sensory enhancements to better understand how the deaf brain transforms and reorganizes itself.

The team’s latest findings, published in the Journal of Neuroscience, reveal that changes in the outputs from auditory regions of the brain are dramatically altered following hearing loss.

“What we found was the normal projection from the auditory cortex to the superior colliculus is all but gone in the deaf model, and is instead replaced by a more dispersed pattern,” said Butler. “It is a much different pattern of outputs than what we see in the case of normal hearing.”

This is the first study to look at outputs from the auditory cortex, and also one of the first to identify a major anatomical difference between hearing and non-hearing models.

The research challenges the conventional thinking that changes in the neural pathways into and between the sensory cortical brain regions account for enhancements in the deaf.

“It was previously thought that inputs to the auditory cortex would be the location of this major structural reorganization,” explained Butler. “We were expecting to see much larger inputs from the visual cortex in these areas that become involved in visual processing, but we don’t see that at all. Those connections seem to be just maintained despite the onset of deafness.”

This study demonstrates that it is not solely modifications of inputs to the auditory cortex, but rather large-scale reorganization of outputs that impacts behaviour.

Using tract-tracing neuroantaomy, the researchers were able to quantify the neuronal pattern projecting into the superior colliculus region from across the entire brain. By comparing these ‘brain maps’ in normal hearing and deaf animal models, they were able to uncover the differences between the two groups.

Butler and Lomber are part of Western’s Brain and Mind Institute, and were assisted on the research project by undergraduate thesis student Julia Sunstrum, now an MSc candidate with the Neuroscience program at Schulich Medicine & Dentistry.

The research findings suggest the outputs from the auditory cortex play an important role in the deaf brain. “Now that we have this answer, there are performing recording and behavioural experiments to do as a follow-up,” said Lomber. “This is a big piece of the puzzle.”

The researchers’ long-term goal is to help design a device for hearing restoration that optimally reengages the brain.

“We need to know what deafness is doing, both structurally and functionally, to alter the way our brain is organized,” said Butler. “There is a lot we can do to manipulate how the brain works, but we need to know what has been done already in order to know what change to reverse.”