Story and Photo by Rob Rombouts

Bob Andersen is proud of what the Faculty of Social Science has been able to accomplish in a short time.

“It is remarkable this worked,” said Andersen, as he looks back at his tenure as the Dean of the Faculty of Social Science. As of January 1, 2020, Andersen ends his term, and will be taking a position as Associate Dean, Faculty Development, at the Ivey Business School.

In his time as Dean of Social Science, there have been more than 50 new tenured or tenure-track faculty members hired, and a shift to courses being taught by full-time faculty, at a time when universities and departments across the country have slowed or stopped hiring. Following the changes, Social Science at Western is ranked 84 in the 2019 QS World University Rankings, surpassing 64 other institutions since 2015.

Andersen came to Western from a position as Chair of the Department of Sociology at the University of Toronto, and quickly set to work making big changes in the faculty. When he took on the role, it was a homecoming of sorts, as he was raised in London, and completed his BA and MA at Western.

“I didn’t know exactly what I was going to do until I got here. I had to spend time talking to people to get an understanding of the issues facing the faculty,” said Andersen. “I knew that in some way we needed to move the research needle. Eventually we developed a compelling vision to move our research profile forward.”

A believer in the scholar-researcher model of university teaching, Andersen identified that the faculty had an over-reliance on part-time instructors for teaching, and had not experienced much faculty renewal in recent years.

“It was clear the way forward was increasing the number of full-time faculty, and the only way this could be done was through a new hiring strategy,” said Andersen.

Determined to change the approach of “chasing bums-in-seats” Andersen asked departments to identify courses that were not taught by full-time professors, and which were not considered essential and valuable to the major and discipline.

For every eight sections removed, Andersen committed to hiring a new tenure or tenure-track faculty member in department, so long as the department could also focus on hiring in an area where it could become “the best in the country.”

“It was presented as an option; no department had to do this,” said Andersen. “I told them if you don’t do it, it’s business as usual; no penalties. It turns out people wanted change.

A key to having people buy into the vision was a sense of trust, and transparency in leadership. Andersen said he purposely did not set targets, as he wanted to encourage buy-in and allow departments to identify their own targets and metrics for success. With the vision laid out, departments responded.

“The uptake by departments was staggering,” said Linda Brock, Director of Administration for the Faculty of Social Science. “Any doubts about the success of the plan were quickly blown away.”

Over a span of four years, departments removed 279 courses, which, along with a retirements taken in response to a faculty-specific retirement incentive, made $7.5 million in base budget available. These funds were reallocated to tenure track positions. There have been more than 50 new tenure and tenure-track hires made since Andersen started his position.

There was a further push toward building a research culture, through the strengthening of support for grant applications, identifying clear areas of research strength within departments, and the establishment of the Network for Economic and Social Trends (NEST), which brought together the existing research centres in the faculty.

Andersen said the changes went against the general pattern in universities, and seemingly against the incentives.

“We undertook these changes despite having a budget model saying we should be chasing bums in seats,” he said. “But the wrong incentives can lead to wrong behaviours.”

Noting increases in positive course evaluations, and a stronger research culture, “it’s clear it was a success,” said Andersen.

His success and leadership is recognized by his colleagues and administrators within other faculties as well. 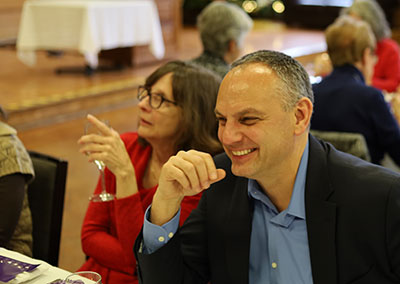 “As a pragmatic leader, Bob offered informed viewpoints that provided opportunities for frank and insightful conversations. Throughout those conversations his honesty allowed us to get to the heart of the matter, with a level of transparency that was appreciated and welcomed around the deans' table,” said Betty Anne Younker, Dean of the Don Wright Faculty of Music. “That, and his sense of humour, will be missed around that table!”

“I have really enjoyed working with Bob. Bob immediately made me feel welcome to the Dean’s table and, as a new Dean, I learned a lot from his example. On a personal level I really enjoyed Bob’s direct “say it like you see it” manner,” said Matt Davison, Dean of the Faculty of Science. “I am sorry that Bob is moving on from the Dean of Social Science role but am thrilled that we at Western will still benefit from his outstanding skills.”

“Bob Andersen has been an important voice around the Deans' table, challenging us to think strategically and to promote Western's research mission as a top priority,” said Erika Chamberlain, Dean of the Faculty of Law. “He has also been a great collaborator, working to dismantle some of the barriers between programs and build mutually beneficial initiatives. From Law's perspective, for example, we've been able to work more closely with Indigenous Studies, Economics, and the DAN MOS program.”

Within Social Science, the impact of the changes will likely be felt for years to come. More than a quarter of the tenured and tenure-track faculty complement in Social Science have been hired in the past five years. Currently, more than 70 per cent of courses are taught by full-time faculty. Andersen expects the rankings will continue to move up in the future.

“A lot of the hires are young people, so the future looks bright,” said Andersen.

With the changes well underway, Andersen was looking for new challenges, and saw an opportunity with Ivey. “If I stayed longer, I felt I would be going through the motions,” said Andersen. “That’s not good for me or anyone.”

Andersen believes there is continued room for the faculty to grow, noting the potential for NEST to push research forward, but he does not intend to try to define the path of future administrators.

“I’m the kind of guy that, when I’m done a job, I’m done a job,” he said. “I won’t be evaluating the next leader, but I will help with guidance and support, if asked.”

Looking back, Andersen feels good about his term, and sees more success for the faculty in the future.

“The response and the change in our rankings is proof of our accomplishments,” said Andersen, emphasizing the collective achievement. “This is something we’ve done together; this was not an individual effort.”